What are the most popular types of card readings?

Home/Posts/What are the most popular types of card readings?
Previous Next

What are the most popular types of card readings? 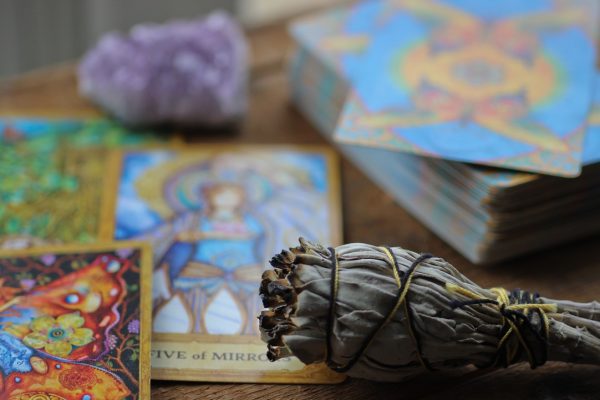 The practice of cartomancy, or card reading, is quite an old one, dating back to 14th century Europe. To this day, cartomancy remains one of the most popular forms of fortune telling and clairvoyance. Those who frequently go to car readings say that this practice helps them gain more insight into their personal dilemmas, understand themselves and their circumstances better, and figure out how to solve their problems. The practice of card reading may originate from the Middle Ages, but the need for enlightenment and guidance is just as present today as it was then.

Over the centuries, three types of card readings have stood out and are still popular today:

This is the classic and most popular type of card reading and it can be done using a standard playing deck. During a reading, the seeker (the person who seeks answers) shuffles and cuts the deck, then the reader arranges cards in a specific layout. Each symbol, colour, and number have specific meanings, but they can also be interpreted based on their location in the spread.

In Wheel of Fortune readings, each card symbol corresponds to an area of the seeker’s life:

Also, each “character” on the cards represents a certain figure that exists or could appear in the seeker’s life. Regional variations do exist, but, in general, the King of Hearts/ Queen of Hearts are parent figures, the King of Diamonds/Queen of Diamonds are authoritative figures, while at King/Queen of Spades are influential, but spiteful figures.

Tarot reading appeared in Europe in the 18th century and involves the use of three possible decks: Tarot of Marseilles, the Rider-Waite tarot deck, and the Thoth tarot deck. No matter the variation, the tarot deck has 78 cards, which are split into two parts:

Angel cards are said to channel the energy of guardian angels who want to protect the Earth and spread love and compassion. The first angel card readings took place in the 19th century, drawing their origin from the Oracle cards used by gipsies.

During an Angel card reading, the reader will draw one to six cards, depending on your question. Angel cards depict the six aspects of spiritual energy:

Depending on the number of cards drawn and their symbols, you can find out how to overcome daily challenges and get guidance on achieving your life purpose.

No matter which one of these three types of readings you’d like to try, always go to a reader that’s experienced, compassionate, and kind. Don’t have readings in the street or in random places, because a card reading should be a deeply personal and immersive experience. Interacting with the wrong reader can undermine its symbolism, and you won’t be able to take away any life lesson from it.

About the Author: World